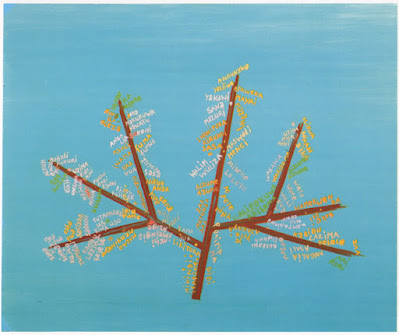 In 2012, now almost ten years ago, I saw an exhibition by René Daniëls that featured his 1987 work 'Lentebloesem'.
One thing I noticed about this work is that the top and bottom left corners both had a small triangle painted in ever so slightly different shades of blue. This struck me as an odd choice and has always stayed with me in my mind.
Recently I decided to look up some documentation for the work in question and I noticed that while a catalogue for a 1994 show at the Institut Neérlandais does depict the work with the two corner triangles, an earlier catalogue for the eponymous 1990 exhibition at the Museum Boijmans-van Beuningen printed a photograph of the work without this characteristic feature. Upon further examination I discovered ten other clear discrepancies between the two images and in general it seems that most of the lettering has been reworked between the two photographs, although this latter observation is difficult to verify when working from relatively small reproductions like these. 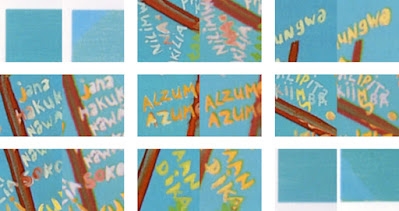 What's interesting is that this change takes place between a book published in 1990 and one in 1994, while it is well-known that Daniëls suffered a haemorrhage in 1987, the same year this work was made, which left him unable to paint for a long time.
The simplest explanation for this discrepancy is that the catalogue for the 1990 Boijmans exhibition relied on an older image in the possession of Daniëls' former gallery, which is credited with producing the book.
To test this hypotheses I studied some catalogues that mention the artist between 1987 and 1990.
The only catalogue that has a photograph of the work in question was the one for the exhibition 'Kades-Kaden' at the Kunsthalle Bern that ran from August 15, 1987 to September 20, 1987. This photograph shows the work in the state that was depicted in the 1990 Boijmans catalogue. It thus would be fair to assume that this accurately depicts the work as it was shown in Bern at the time.
All catalogues on Daniëls' work in the relevant period extensively credit the gallery Paul Andriesse for his contributions to making the catalogues possible, as well as citing Peter Cox from Eindhoven as the principal photographer of the works. Additionally, this 'Lentebloesem' belongs to the collection of the René Daniëls foundation, which is the owner of the materials present in the artists' studio at the time of his haemorrhage.
I thus suspect that what happened is that the work was 'finished' and photographed early in 1987. Either for the exhibition 'A'dam - E'ven' at the Paul Andriesse gallery in Amsterdam, an exhibition at Rudolf Zwirner's gallery in Cologne or as part of a routine inventory of finished paintings. Photography in the 1980's was more complicated than it is today, so it wouldn't be strange to assume that Andriesse was the central place that safeguarded the photographic documentation of Daniëls' work and that materials from their archive were relied upon by other institutions. The Kunsthalle Bern subsequently used this photograph, presumably taken in Eindhoven by Peter Cox, for the catalogue of their exhibition.
Sometime after the work returned from Bern, Daniëls decided to rework the painting. This is why it was in his studio at the end of 1987 and why the painting is presently in the possession of the René Daniëls foundation, unlike other works with the same motif.
For the 1990 Boijmans exhibition, the earlier documentation from the archive of Andriesse was used, thus erroneously depicting the painting in an older state. Sometime between 1990 and 1994 new photographs were made, now accurately reflecting the changes made to the painting and its appearance in the present.
That is what I learned about the work from looking at some documentation. What I was interested in, however, was why those two triangles are placed in the left corners. For this I came up with no answers and I'm unsure an answer will ever come, letting it remain a mystery forever.