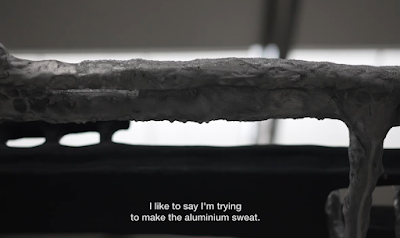 The above screenshot is taken from a video wherein Isabelle Andriessen talks about her exhibition DORM, which took place between September 18, 2021 and February 6, 2022 at De Pont, Tilburg.
One of the things Andriessen does in her work is use cooling systems to cool down aluminium shapes so that condensation forms on their surface. As you can see above, she describes this process as 'making the aluminium sweat'.
I visited the exhibition recently and I have some problems with this description. When you encounter the work without knowing Andriessen's interpretation, what you see is some metal structure with water droplets on its surface. As there is no obvious water source in the space, the connection you will make is that these water droplets must have formed through condensation of the water present in the air and that the metal must thus be very cold.
However, this basic chemistry knowledge directly contradicts the notion of making the metal 'sweat', as sweating is a mechanism that some mammals use to expel heat from the body. Such sweating would thus suggest the aluminium is warm, yet all knowledge that can be gained from looking at the presented materials indicates that the metal is very cold.
An additional, and ironic, fact is that aluminium salts are the most common ingredient used in antiperspirants, making the possibility that a visitor connects the droplets to the metal sweating even more unlikely.
From the press release we also learn that Andriessen asks herself the question if the distinction between living, non-living and dead matter is really as clear as it may seem. Presumably she attempts to demonstrate this by making the aluminium 'sweat' or do things we might otherwise not associate with non-living materials. While it is non-trivial to conceptually distinguish living from non-living materials, the living materials are all primarily composed of non-metals, with hydrogen, carbon, nitrogen and oxygen taking centre stage. Why these elements are the vital ones for life, and not others, has to do with the way electrons surround the nuclei in both atoms and molecules. Which is a fundamental aspect of the formation of matter and not something that you can influence by running some cooling fluid through a tube.
The work of Andriessen thus doesn't question these distinctions, but in fact reaffirms them. Anything composed of mostly aluminium, like her sculptures, will always be non-living. It is also a certain fact of chemistry that the non-metals she adds to the basic aluminium shapes will be able to react in some way with oxygen and hydrogen, which will then lead them to change their appearance over time. Andriessen interprets these changes as indications of life. However, a similar process is at play on a rusting bicycle, which is clearly not a living thing, so to claim that this 'autonomous behaviour' blurs any lines between the living and the non-living is a naïve and uninformed way of looking at what's going on.
Many of the statements made by Andriessen are at odds with our factual existence. This doesn't necessarily need to be a problem. There is such a thing as poetic license and I have no problem with that kind of misinterpretation if the provided explanation is cohesive within the presented fiction. Such is not the case here. What can be seen in Andriessen's work very much takes place in our undeniable physical reality and actively shows mechanical components like the cooling system, so that the possibility of a magical explanation for the things that are found in the work is completely eliminated. Yet in the texts surrounding the work, Andriessen tries to convince us of her own personal and fantastical interpretation, which as we have seen conflicts strongly with the presented facts.
If you want to be a magician, you hide how the trick works and through your clever execution you convince the audience of the falsehoods you present. If on the other hand you don't want to do this, then you can show exactly how the trick works and convince an audience that this factual reality is just is as interesting. What you cannot do, however, is show how the trick works and then simply tell an audience that it works in a completely different way that is supposedly much more interesting than what is actually going on. Doing that doesn't make you look like a magician, it makes you look like a quack.