On this blog I will write with the assumption that the reader has an elementary understanding of art. Knowing that not everyone possesses this understanding, this post briefly outlines the way art is understood today.
A few years ago I defined art as object manipulation uncommon in daily life. This essentially means that if something has some expected characteristics, then a deviation from those characteristics will likely result in art.
This is a large departure from the common aesthetical, institutional or intentional ideas about art and should therefore require a lengthy justification, which I'm not going to offer here. Instead, I'm going to give a very brief introduction by showing in an extremely intuitive way what three artists have in common who are irreconcilable in the current art discourse. We are going to do this using modal logic, so by imagining a world where their way of doing this wasn't out of the ordinary.

The first is the duo Elmgreen and Dragset, or more specifically their 2005 sculpture Prada Marfa.

Often defended as a criticism on consumerism, in reality the only aspect that makes it art is that we are not accustomed to high-end fashion stores being situated far out into the desert. If the luxury value wasn't linked to high property prices of certain urban areas, these kind of stores would be more widely spread out geographically. In fact, if we reverse the logic and imagine a world where luxury stores were often located in remote locations to guarantee higher exclusivity, Prada Marfa would simply just be another store of this kind, whose art value would be impossible to justify. Something similar is already the case with the many gas stations that can be found next to remote roads all over the world, which nobody has attempted to 'critique' by simply building another one.

Secondly I would like to consider an elegant work by Belgian artist Leon Vranken.

Pallet, from 2014, is exactly this, a pallet. At least it is in its outline. Vranken has created a pallet, but not one in the usual cheap woods that are coarsely nailed together, stamped with regulatory marks and sold for cheap or even circulated between companies.
Instead, he meticulously crafted a near-perfect ideal model of a pallet from expensive solid oak, which is also heavier, and thus less practical, than a normal pallet. The level of craftsmanship, time and money spent on creating this piece is unrealistic for a pallet's required functionality and therefore falls outside the realm of the everyday object, entering into art by default.

Even for Tino Seghal, the perceived master of the ephemeral, the work still consists of uncommonly manipulated objects. Consider This is exchange from 2002. In essence it is nothing more than a museum guard opening up a conversation about market economics with the visitor. Generally speaking, it is uncommon for any visitor to have an interaction with a guard beyond a mere acknowledgement and extended even further, it is unlikely for two strangers to have any kind of conversation beyond mere pleasantries. This unlikelihood of events makes the work have a place inside art. But again, it's not difficult to imagine a world where people would constantly discuss economics with strangers in public places and in that world This is exchange would just be another instance of this normal occurrence, therefore having no need to be put on show inside an institution.

From these examples an intuitive feeling for what art is should already begin to crop up. However, an attentive reader will also have noted that these three examples are all from the past decade or so and he will be inclined to say that art changes over time. This is certainly true and the problem of past art, and first art in particular, has indeed provided insurmountable complications for some more recent art theory.
In our simpler and more lenient view of uncommon object manipulation as art, these problems can be explained away.
Let's take the earliest generally accepted example of art; a piece of engraved ocher from Blombos cave. 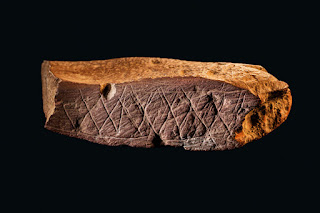 It is highly unlikely that whoever made these marks considered them to be art, but we certainly do. The reason we do this is that we posses a number of other objects from that period and from the idea of daily life we have construed around those objects, we can find no function for this particular piece of ocher. It is an uncommonly manipulated object for the daily life of its time.
But let us again imagine that it will turn out in five years time that these engraved lines were a road map or a calculation tool. Perhaps this is unlikely, but its not impossible, and if it turned out to be the case, the ocher piece would instantly lose all its art connotations.

The idea of art I will assert in this blog is thus simple and covers the entirety of history, inside and outside art. Perhaps it is not final, but it will offer insight into my personal works, so it is advisable to keep it in the back of your mind when reading other texts on this blog.