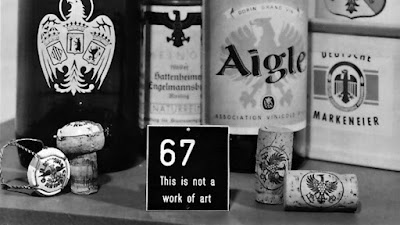 At different times between 1968 and 1972 Marcel Broodthaers exhibited a number of objects under the guise of a 'museum', the Musée d'Art Moderne, Département Des Aigles. These works are commonly discussed as an instance of institutional critique and indeed Broodthaers himself has written in a handout for the museum that 'This museum is a fiction. In one moment it plays the role of a political parody of artistic events, in another that of an artistic parody of political events'.
In the first presentation of the museum, Broodthaers displayed a few hundred objects that were all related to the theme of the eagle in some way or another. They were also all labelled with the unequivocal statement 'This is not a work of art'. Broodthaers thereby makes an ironic observation about the way museums can validate any object or subject by merely giving it a (dis)proportionate amount of attention.
While this 50-year old project by Broodthaers was meant to highlight the inherent problem that anything presented in an exhibition will be considered important by virtue of being in the exhibition, I find that in contemporary practices concerning so-called artistic research, this problematic characteristic has been fully internalised in a non-critical nor ironic fashion.
Many a time I have seen simple collections exhibited that pertained to a certain subject that ostensibly had been researched. Yet any such collection can only gain importance by virtue of the conclusions drawn from them or principles that they illustrate. It's precisely these research projects that often don't elaborate on the subjects of their purported research and opt to simply display the objects they encountered in the auto-validating format of the exhibition and the institution it's held at.
Broodthaers himself would have likely been critical of such a method of art-making, as he has said 'I am against the museum as a center of research for avantgarde art. The museum should emphasize its role as being strictly a place of conservation. The centers of contemporary research are enterprises of ideological confusion, destined to transform art into some kind of Olympic Games...' and similarly:  'I believe my exhibitions depended and still depend on memories of a period when I imagined the creative situation in a heroic and solitary manner. In other words, it used to be: read this, look at this. Today it is: allow me to present'.
With this post I intended to chart the influence, or lack thereof, of Broodthaers' project on the current exhibition practices for artistic research. After some initial research I however ironically found that the literature on Broodthaers Musée is too fragmented to get a clear view on the full extent of the work in a short amount of time. Much of the factual exhibition of artistic research in the present day is likewise poorly documented, which is further exacerbated by the lack of a clear definition or self-appointment of the artists who engage in such undertakings.
All that is left is thus my initial remark and this extremely short introduction to the subject.