'Conventionally, neighborhood parks or parklike open spaces are considered boons conferred on the deprived populations of cities. Let us turn this thought around, and consider city parks deprived places that need the boon of life and appreciation conferred on them. This is more nearly in accord with reality, for people do confer use on parks and make them successes--or else withhold use and doom parks to rejection and failure.'
That is how Jane Jacobs introduced the chapter on the uses of neighbourhood parks in her 1961 book The Death and Life of Great American Cities. This book gave me the first spark for an enduring interest in the workings of parks and landscape architecture.
So when I found out that the newly built neighbourhood Meerstad in the Dutch city of Groningen realised 'the first park in the Netherlands that has been designed in conjunction with an artist' last autumn, I of course was curious to see the results.

This is the aerial photo that is used on the website of the project and shows the park when the primary landscaping was finished. It shows a good overview of the design principles of the park. The design by Jeroen Doorenweerd was based on a tablecloth that was scrunched together somewhat during a pitch meeting and then meticulously copied to scale in the final park. This idea is an appealing one and it does make for a great bird's eye view, which is probably what convinced the committee during the design stage of the park.
I was excited about the project, as we don't have many of these ambitious park projects in the Netherlands. When I visited the park last spring, however, I could only conclude that the park is a failure. 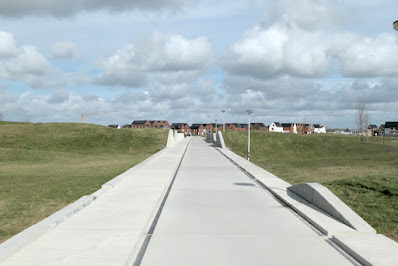 While the aerial view of the park might be a stunning sight, a park is experienced by its users on the ground, moving through its landscape and reacting to the cues in this landscape. The above photo was what I was first confronted with when entering the park. This view is already quite a strong indication that the design of the park isn't aimed at its potential users.
The primary way to enter the park is through this thoroughfare for cyclists and pedestrians that runs through the park and connects two different areas of Meerstad. I call it a thoroughfare instead of a path, because the users of this path, the only path in the park, are encouraged to stay on this path through the design of said path. That means that the most common impression users will have of this park is a 600 meter long straight grey road, without any points of interest that they will encounter along the way to sway them from this path and actually use the park.
On each side of the path there is a concrete barrier that varies in height, roughly in accordance with the flow of the grass hills that surround it. 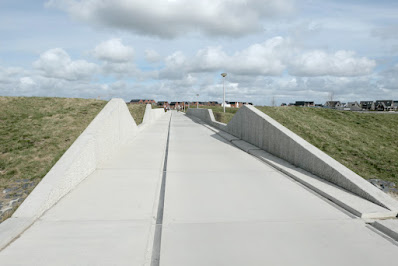 The placement of these barriers are somewhat inconsistent and strangely serve to separate the primary access for the park with the park itself. There is physical barrier between the path and the rest of the park. 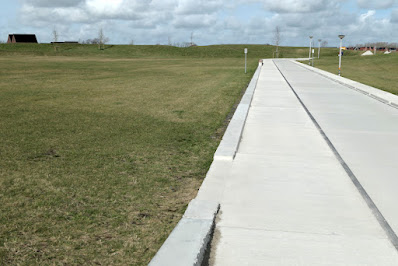 On a few occasions this barrier has a gap in it, freeing up the possibility for pedestrians to cross over into the greenery.
Which begs the question why the low barrier is needed at all. The likely answer to this question can be found when this barrier is looked at from the other side. 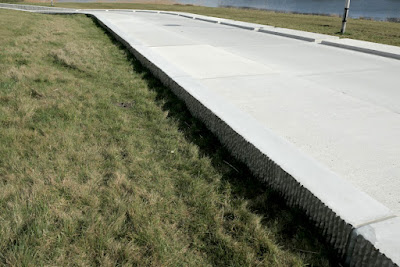 As you can see, on the other side of the path, there is a roughly 40 centimetres deep ditch. This is higher than a step on staircase and besides forming a physical barrier, it thus also forms an additional psychological barrier for venturing off the path and into the greenery. These aren't great obstacles to overcome for those who wish to venture onto the grass, but they will nevertheless keep a less determined user from loitering in the park and thereby populating the park to let it function as it should. 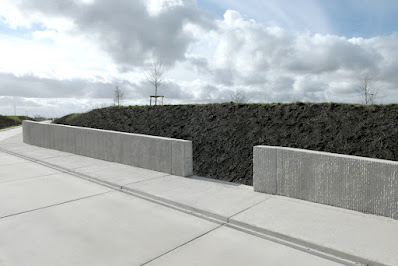 The gaps in the barriers also occur where there isn't a direct possibility to walk into the greenery, as can be seen in this picture of this recently planted and quite steep hill. By the time of writing this hill is likely populated with some shrubbery, which makes the gap all the more mysterious. 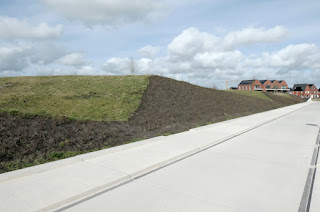 During my visit I also noticed some parts of the path were additionally fenced off with wire fencing, further decreasing the possibility for people to enter into the park areas of the park. I thought perhaps this fencing was temporarily in place to protect the recent plantings. On the other side of the path there were however similar plantings, but no fence, so this theory doesn't seem to hold any ground.
It should also be noted that this fencing was likewise present around the park's perimeter at the car park, forcing visitors to walk around and use the concrete path to enter into the park. Perhaps ad-hoc decision making is the most straightforward explanation for these otherwise inexplicable choices. 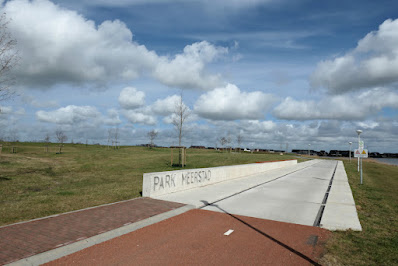 To come back to the psychological barrier formed by the minuscule physical barrier surrounding the path, let us take a look at one of the entrances. Here a very common Dutch bicycle- and footpath design transitions into the path designed specifically for the park. These commonplace paths actually are far more inviting for getting off the path than the path designed especially for the park. It can thus be clearly seen that this design was chosen for aesthetic rather than functional reasons and that is one of the hallmarks of bad design.
Inside the grassy areas of the park I only found one bench, which surrounded a tree. 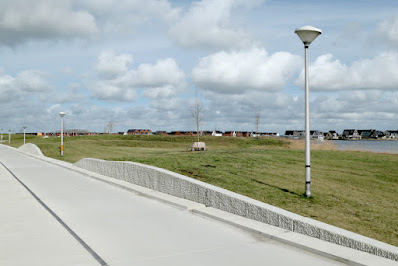 As can be seen from this picture, this 'recreational area' seems quite far removed from the path that the user of the park is most likely to be walking on. Unless one thus has a specific need to sit on a bench, it is unlikely that one stops to do so and enjoy some time for themselves. 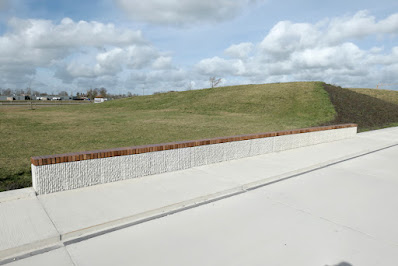 There was also exactly one long bench placed along the path in the park. This bench actually showed some signs of use, despite being not even a year old at that point, thereby indicating that there is some kind of demand in the public for a natural resting place inside the park where they can relax as well as congregate with others without planning to do so.
Moving on from the accessibility of the park, there are also some concerns regarding the implementations of the water management. Much of the park is designed and built in such a way that water will accumulate at the the edges of the grassy areas, which are thus precisely the areas one has to cross to enter them.
I have already mentioned the trenches next to the path that are likely made to serve exactly this purpose in what is still a generally rainy and wet country. The presence of actual drains and patches of standing water doesn't bode particularly well for the usability of this park. If you have to cross a muddy section of eroded grass to get to a little dry spot, that is going to be a serious deterrent to anyone but the most avid picnic-enthousiast.

These drainage problems are also present on the outer edge of the park, where the grasslands meet a public road. 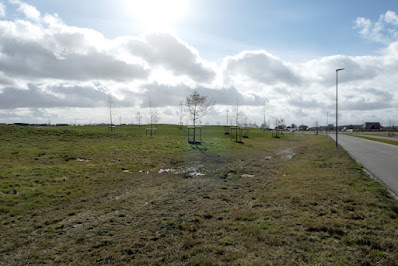 Once again the ground is lowered where the park comes into contact with a road, in essence creating a part-time moat surrounding the parklands. This area is thus nearly completely unsuited for the recreational use it's intended for.
There is also a two-fold problem with this outer edge and the way it connects to the surrounding area. On the one hand it's too closed off, with the lack of clear paths to the neighbouring houses preventing easy access to the park.
On the other hand it's simultaneously too open. There is nothing closing off the park, even though its directly adjacent to a road that's open only to motor vehicles. If the park is thus used in the way it was meant to be used, chances are extremely high that at some point a football or even a child unexpectedly ends up on this road, resulting in an accident with possibly grave consequences. Granted, the speed limit on the road is 30km/h, but the nature of the road makes it tempting for motorists to drive much faster than this. I therefore wouldn't be surprised if this edge was fenced off at some point or other, further reducing the usability of the park as its grassland will essentially function as a cul-de-sac. 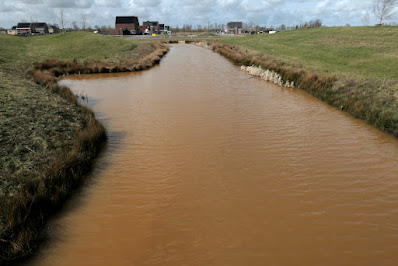 As a water management related aside, the short canal running perpendicular to the road that is bright blue in the promotional photo was murky brown during my visit, although I don't know what the reason for this could be.
Additionally there is a small play area inside the park that I haven't touched upon here. Besides the awful water management and poor accessibility, its main problem is that all the play structures in the area can only be used in one way and in one direction. In order to stay engaging to a child over a longer period, a plaything must be able to provide a way for multiple and even unintended uses. This is once again a violation of some of the basest principles of playground design that the designers were unable to implement in an appropriate manner.
The failures of the Park Meerstad are manifold and I've personally found it telling that on the sunny spring day I visited the park, I was the only visitor who wasn't simply passing through.
At the same time, not even 100 meters away from the entrance, there was a small and not particularly appealing playground that nevertheless had a grandmother playing with her two grandchildren, as well as a father playing with his child.
It shouldn't ever be forgotten that parks should be judged on how its users (inter)act within it and not how beautiful it looks from an impossible vantage point. With this in mind Park Meerstad is closer to a glorified path through a field than the park it purports to be.