This post is the 100th post on this blog and although I don't think of myself as a sentimental person, I nevertheless wanted to make sure I wrote something meaningful to mark this wholeness of decimal multiplication. It took me a while, but I gave it some thought and decided that I should write about the extensive history some of my works have undergone. The selection of works I want to talk about are all featured in my 2019 publication 'The Goddamned Studio'.
In this publication I straightforwardly reproduced some images of works that were finished to some degree, yet had never been exhibited or were dismantled before finding their way into a later work. To epitomise my personal position towards these works, I adapted a conversation as heard in the mini-series Band of Brothers and let this grace the cover: 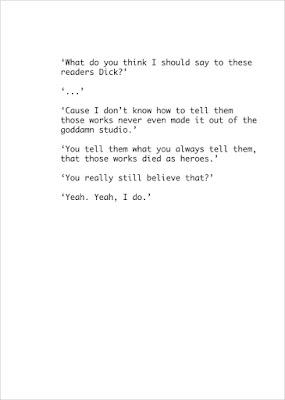 The first work from this book is a motif, an icon or an emblem that I've attempted to deploy in a number of different scenarios. At the core of it stands a little airplane that is drawn upside down. I don't really remember how this came to me, but it likely permeated through some idle doodling. I've also had a long standing fascination with artists who can make drawings in coloured pencil look impressive. Unlike painting or something like charcoal drawing, coloured pencil is a very direct medium that doesn't allow for middling talent to be uplifted through careful blending of layers. A somewhat greasy coloured pencil is has a harsh appearance that demands very flat and direct imagery. As such, it seemed to me that the cartoonish outlines of the upside down airplane would be a good match to the material characteristics of the coloured pencil.

I got to drawing a number of scenarios that this plane could find itself in, deliberately attempting to find the edges of the environment it could occupy, with its presence still forming some kind of cohesive narrative in the overall image. Although I found a handful of strong associations that matched well with the subject and the material techniques, after about 100 somewhat failed attempts I had to admit that it nevertheless didn't find any large wells that I could draw from. 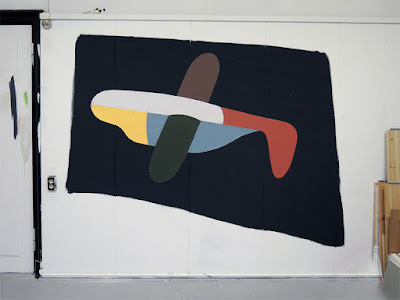 Leaning into the childlike cartoonish aspects of the plane and wanting to work again on a larger scale, I later made a version of the plane that went directly onto a wall. With a broadly painted background of magnetic paint, paper cut-outs of sections of the plane are attached to the wall with magnets. These magnets act as rivets in the imaginary physicality of the plane.
Although I didn't mind the work per se, I felt like I was overstretching my boundaries in trying to come up with a form the work could take. It was certainly a solution that worked to some degree, but there was little elegance to be found in it and didn't have any of the necessity that seems to naturally fall into place in some of my better works.

A few years later I once again picked up the coloured pencils, wanting to explore the medium further. This time I started with abstracted drawings of buildings that I copied directly from magazines and newspapers. The imagery was a bit thin, but I learned more about blending of colours and which lines remain visible when working for longer on the drawing. This led me to placing a white plane in a coloured block, its presence justified by the architectural underdrawing.
I still don't think that this work is quite a finished product yet, but its current form is certainly reduced to such an extent that in its limited complexity it doesn't allow for many more elements to be either added or taken away. I therefore see this at the present time as a closed chapter that I have no further plans for in the near future.
Another work from the 2019 publication doesn't have a title, but it nevertheless made it to the end of the line after a number of years in development. Around 2015 I wanted to make some sculpture that utilised pillows as a constructive material. It seemed like a way to quickly construct sculpture with a large volume, while still being handleable by a single person. Their shape also seemed to imply the modularity of 60's minimalism, yet in its limp shapelessness it is of course a strong antithesis to the principles of many works from that time. 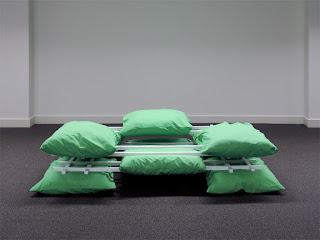 My first attempts were somewhat Donald Judd inspired, with a modular system of some interlocked latticework providing a support for a minimum amount of pillows needed to be able to complete a construction of considerable dimensions.
I consider this an early experiment and although I thought about this work often during that time, I didn't explore it to any particular great extent. 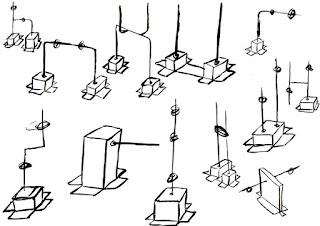 A few years later I considered a similar construction with different underlying principles. Taking inspiration from the tight binding that occurs when a pair of bolas wraps itself around an object, it seemed interesting to me to create a similar construction with pillows. For such a light and cumbersome object it is of course impossible to wrap itself so tightly and this seeming impossibility was what I wanted to address. 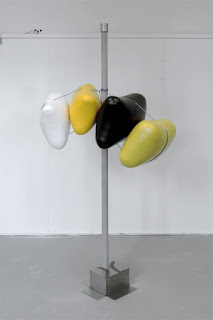 In the end creating such a work proved unwieldy without significant levels of cheating.  While I didn't wish for the work to be constructed by slinging some pillows around a pole, I did think that at the very least it should be supported primarily by the friction of a piece of rope.
This led me to sculpt some pillow shapes out of expanding foam and then having these coated in painted polyester. This is not a cheap process and this had previously kept me from exploring these options, but I had then recently received a working grant and I was thus full of excitement to seek out my limits.
In the end the resulting sculpture left me unsatisfied. Though not necessarily a badly executed idea, it once again didn't have any of the clarity that I was finding in some of my other works around the same time. 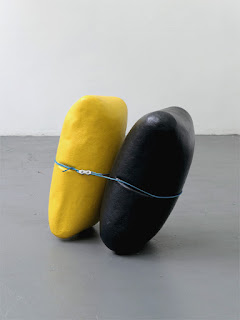 It wasn't until a few years after that that I cleaned my studio and just happened to have these two pillows standing upright and leaning against each other. I was taken aback by the simplicity of the gesture and had finally stumbled upon the reductive shape I had been looking for all that time. The materials and construction were all already in place and taken directly from the previous sculpture, the only difference being that all additional elements that didn't contributed to this core conception were stripped away. 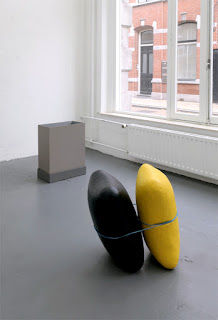 In October 2020, five years after initial work had started, the work was finally featured in an exhibition at Kunstpodium T in Tilburg, the Netherlands.
For the final work I'd like to discuss here I have to call back to one of the earliest posts on this blog.
Therein I discuss that there had been, and have been, but few respected artworks made with 3D printing technology and I explained this phenomena by pointing out that the technology is so young that a consensus simply hasn't formed yet around a common working method for the technology. Because there is no common way of working, there is no way to deviate from those expectations and end up with art, just like how it had been with photography, video, computing and relatively recent building materials like epoxy.
That being said, the question did linger in my mind of what one then could make something that is to be considered a 3D printed artwork. 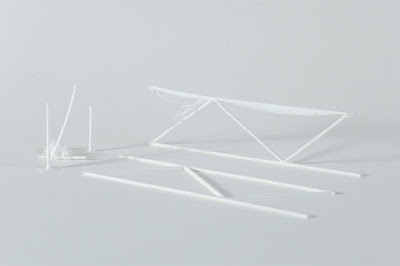 My first and most obvious solution was to create three small objects that highlight not what a 3D printer can do well, but instead what it does badly. A latticework construction is one of the simplest and strongest way of building, where one can quickly, cheaply and efficiently create large volumes and it peaked my interest that it exactly these kind of forms of thin diagonals that a 3D Printer, for all its promises of speed, cost and effectiveness, struggles the most with reproducing. 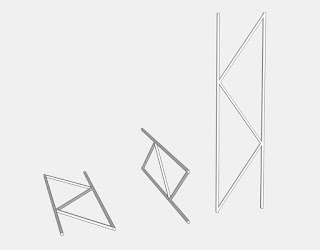 I therefore designed an extremely straightforward shape that was then printed in three orientations. Flat, standing horizontally and standing vertically. As one can see in the photograph of the resulting work, the particular strengths and shortcomings of these three options are well illustrated.
Although I found it to be a telling illustration, in my mind it was still mostly that, an illustration. The work simply showed how a certain concept could be applied to a certain technique and had little to assert on its own merit. 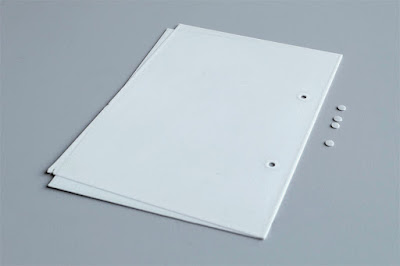 I kept on playing around with the idea from time to time and the most recent work I've made for a 3D printer is titled '4 gaten', or '4 holes' in English.
It consists of nothing more but a 3D printed model of a folded and perforated piece of DIN D4 sized paper, together with the four holes that were removed from it.
This work doesn't rely on exposing the flaws of a certain technique like the other work did, but rather shows an impossible consequence of the technique. This more subtle exploitation of the 3D printer's function shows instead of tells the themes I want to discuss with my work.
Many, if not all, of my works undergo such lengthy processes of iteration and I hope that for my centesimal post I've been able to enlighten and entertain a reader by drawing back a little of the curtain that at times hides this from view.