Earlier this year I did a complete overhaul of my personal website. The simple, and self-coded, previous design focused on showing installation views of exhibitions. My rationale for this approach was that in this way I merely documented what was already publicly shown and this will by definition be a somewhat cohesive grouping. As the years went on I however amassed a number of works in my studio that for various reasons never got exhibited. Wanting to show the longer processes of other works that have remained hidden, I decided to re-create my website to serve as a collection with more comprehensive documentation. Naturally, this also led me to document some works that hadn't previously been documented. In this process I encountered some difficulties that I will outline in the rest of this post.

Often my work is rather subtle and reserved in its expression. This doesn't necessarily pose any problems when encountered in reality, but there are some difficulties involved in showing work through a single photograph on a small-ish screen. To give as much information about the original work within such a limited perspective, I sometimes have to re-imagine the work and reconstruct it anew from the ground up.

The clearest example for this are the works in the TURM series. They are paintings on wooden panels measuring 122 x 80 centimetres and feature nothing but a few lines in crayon on a white background. Any field of a single colour is difficult to photograph, but to also capture the nuances of a thin line within this field of colour is nearly impossible. Even on the original files from an 18 megapixel camera, the drawn lines are only 8 pixels wide. This is sometimes reduced to only a single pixel at web resolution. 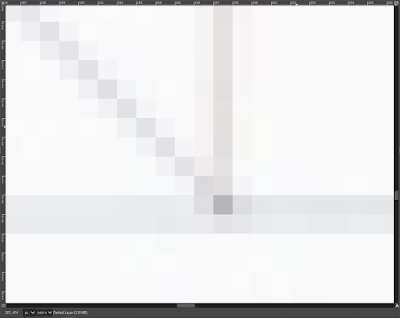 It thus goes without saying that clarity in the image is extremely important, yet this is simultaneously extremely difficult to achieve. The lines are thin and sometimes painted so light on the background that any adjustments to make the lines more visible affects the background in an adverse way and vice versa.
My solution to the problem was to retrace the inside and the outside of the painted lines in Photoshop, before overlaying a layer of not white, but 10% grey at 90% opacity.
Teller of magician's duo Penn&Teller once defined magic as someone simply spending more time on something than somebody else could possibly imagine and I was reminded quite strongly of this sentence while working on it. 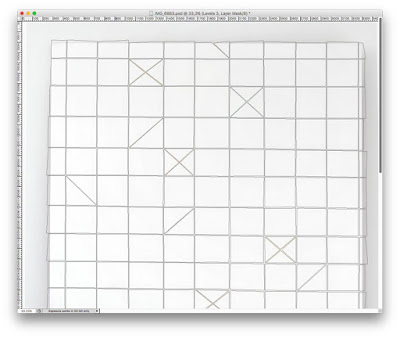 On the left here is an approximation of how this documentation would look without this extensive editing, on the right is the final result: 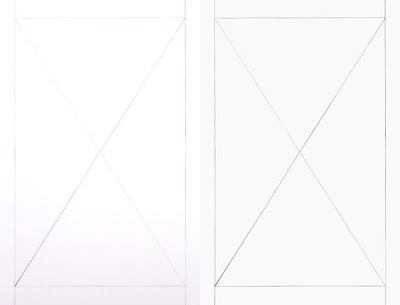 Although this kind of digital reconstruction has little to do with the photograph as it came out of the camera, the perception of the work is in fact closer to what one would experience in reality and that ultimately is the only criterium one should look at when documenting work.

When seeing the work in reality, it is also clear that these lines are not just drawn or painted on, but rather a complex mixture of the two. It is impossible to expect someone to be able to distinguish fine details when its reproduction is almost 18 times smaller than the original.
Nevertheless, it is a recurrent theme in my work where the finer details contrast the overall image, highlighting something about the particular origin of the work. Even in smaller works this mechanism is at play and also in those works this effect is lost to some extent. 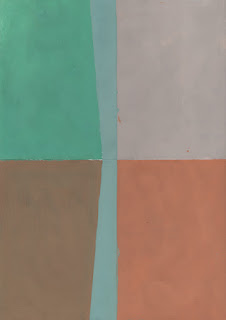 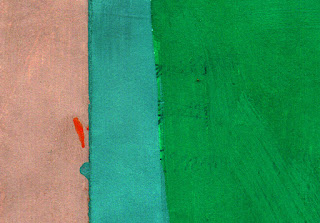 In this work there are clear details to be found, such as the red stain and the fingerprint on top of it, as well as the writing underlying the green paint and the slight difference in texture and colour of the one green brushstroke. These are details that can quite easily be spotted on the original work, yet are almost impossible to distinguish on a scan at normal web resolution.
It should also be noted that this work is then still relatively small at 29,7 x 21 cm. For any work of an appreciable size this interaction thus becomes virtually impossible, even if it is often vital for a full understanding of the work.

Scale itself is even problematic when documenting work. A skewed sense of scale is a recurrent theme in my work, where things are often ever so slightly bigger or smaller than you would expect them to be. 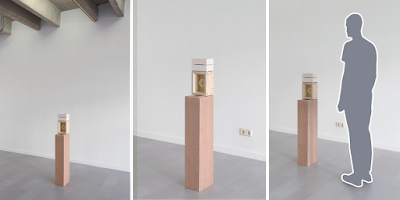 The middle photograph is the image a visitor on my website will see first of this work. This photograph makes the work seem like it entails a plinth of a standard size of roughly 110cm in height. At the end of a sequence of photographs, the left image is shown. In this photograph the height of the ceiling perhaps makes the work appear even smaller than it is in reality. The image on the right shows the work in relation to an adult human. Introducing such an external and absolute measure of scale makes the size of the work abundantly clear, but at the same time this invariably takes away a considerable amount of attention from the work. Including such a figure thus isn't a viable solution in most cases.

Another element that can affect how you perceive the work is the viewing angle. Depending on the way the light strikes it, a work might reveal something that was previously unseen. This is a photograph of one of the TURM paintings at an oblique angle: 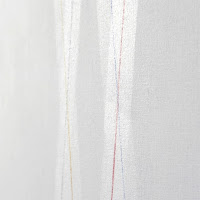 The sides and sometimes even the back of a work can reveal a different perspective on the way the materials were handled and only rarely is there an opportunity to record these kind of considerations on a photograph without creating an awkward and skewed image that isn't full of clutter.

Speaking in more broad terms, one can say that the physicality of a viewing body is naturally lost in a photograph. When looking at a work in an exhibition, there is always some awareness of what is behind you, or just around the corner. While making exhibitions this is an important aspect that allows you to focus a visitor's attention, but in the documentation of said exhibition this doesn't always carry over in the same way. 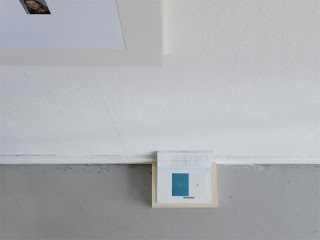 In this work a board with two passport photographs is hung on the wall, while on the floor stands a little plinth displaying a copy of Josef Albers' Interaction of Color. This volume is opened on a page with a similar arrangement as the one that hangs on the wall. The presence of both elements is evident when you stand in front of the work, as you feel the wall in front of you and the vague outline of the other part of the work is floating around in your peripheral vision. Because of the optical differences between an eyeball and a camera, it is quite literally impossible to adequately capture this experience in a single photograph with current technology.

Converting something three dimensional into a flat image of variable dimensions is always going to encompass some amount of interpretation. In this post I posit no solutions, but hopefully you have gained some insight into the problems I've had while making these translations for my own work.