If You Believe the Hype, You Have to Believe a Backlash

I'm always caught off guard by how much pushback my ideas get from people who have a theoretical education in art, but have no experience making it.
Upon learning of my definition of art as object manipulation uncommon in daily life, somebody who was working on her post-doc claimed without stopping to think that it must be wrong because art has to have a goal of some kind.
I paused and thought about that for a second before I told her that as soon as she finds a goal that unifies all of art, yet somehow excludes everything that isn't art, she should let me know.

This pushback is especially odd considering that my approach is the way a general public invariably uses the word 'art' when trying to describe something as such. Their aims are often different from mine, commonly trying to praise and elevate some activity or conversely to ridicule and ostracize, but whatever their goals, the aspects they highlight are always what makes those things uncommon. Whenever something is described as artful or brought forward as 'proof' that field x is 'art', no one has ever used a run of the mill example of that thing. It is always something that is out of the ordinary to some extent.
Creators of videogames are often attached to the idea that their medium is art, but when they give examples of this they never show the best-selling tropes of the medium like FIFA or Call of Duty. The games they talk about when trying to legitimise videogames as art are games that deviate from the norm, such as Papers, Please, a game where you do nothing but check passports at a border control point.
On the tv-program Top Gear they have argued on multiple occasions that cars are works of art, yet the examples they use are Lamborghini's, Ferrari's and Aston Martin's, not the Renault Espace's or the Kia Sorento's of this world.
And when it's said that architects are artists, people speak of Frank Gehry and Santiago Calatrava, not of the nameless schmuck who penned out five blocks of indistinct public housing.
I could of course go on at infinite length about this, but perhaps its better to let you imagine some more examples to convince yourself and I will just tell you an anecdote instead.

When I first moved to the house I live in, my front garden was empty.
Provided with this blank slate, I took the opportunity to research a little about what other people in the neighbourhood did with their gardens and try to formulate an alternative that nevertheless by and large adhered to the unwritten rules of what 'ought' to take place in such a garden. This is what I came up with: 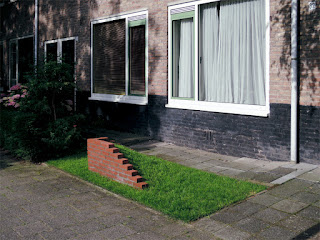 As any garden needs upkeep and attention, I was working outside one day maintaining the grass of my garden when four children walked up. They were little tough guys, about 8 years old I think, so one of them asked me a question: 'Sir, do you think this is beautiful?'. Curious to find out what they had to say I replied that I didn't really have an opinion and that I was just there to maintain it. Two of the other boys said they found it ugly and this went back and forth for a while until the the last boy, who had been silent up to then, decided to speak up. As if he had a great revelation he opened his mouth and exclaimed; 'Ooooooohhhhhhhhh, it's art!'
This seemed to satisfy the other boys and they immediately trod onward without saying goodbye.

Which begs the question, if four little boys can intuitively come to these conclusions, then where did we go so wrong that people with more than a decade of university education are actively hostile towards them without being able to provide a better alternative?