Getting to Know a Space 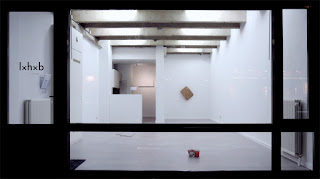 When I signed the lease and received the keys, the space was about as empty as it could be. 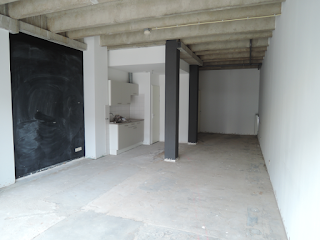 There wasn't even a single lightbulb present and the only fixture consisted of a small but permanent kitchenette.
In this space I set two new walls at a right angle, so as to create a small office space as well as having a bit more wall space for the gallery.
The resulting space left for exhibitions, about 35 square meters in total, at first seems like near perfect square, with a small recess breaking up this rigidity.
After installing the first exhibition, I actually realised that the space works much more like a t-shape, with the bottom left corner of the floorplan not really being viable for showing work in. 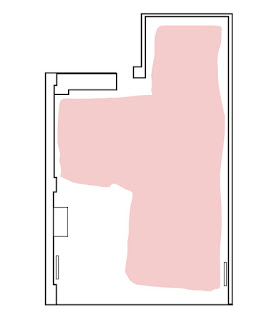 This has two reasons. The first is that the entrance to the space is located there, so it is obvious that you aren't able to place any work there if you want people to be able to enter the rest of the space. The second is a combination of a heater and a big closet that houses the fuse box and other such essentials, which takes up what little wall space that might otherwise be available.
As the space was completely empty, I had to design and install the lighting myself and I had already somewhat anticipated this dead space around the entrance by not putting a lamp directly over the entrance. This darker corner receded quite subtly and naturally in the empty space, but perhaps it is now accentuating the dynamics of the space a tad too much when the placement of the works is already sign of this situation. 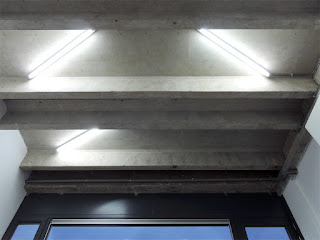 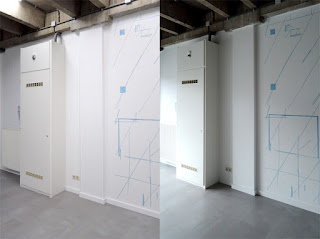 Nevertheless, these changing lighting intensities bring about some difficulty that I had hardly anticipated, most notably in some shadowy corners on some of the walls. Next to the permanent closet is a small gap before there is part of a column protruding from the wall. I had anticipated to be able to use the space around this column for hanging small works, but when seeing the space in different conditions is became clear that the shadows cast by the both the closet and the column itself will make this a less-than-elegant option in most cases.
Additionaly, the light coming in through the large window also interacts with the artworks I bring into the space. 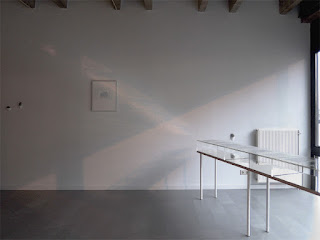 For a series of drawings by Henri Jacobs in the first exhibition, I built a presentation table with a mirror that allows both the front and the back of the drawings to seen simultaneously. Initially I had placed this table near-parallel to the front window. When I arrived the next day, the sun had come out and cast a big ray of reflective light coming from the table. In response I turned the table at a slight angle, so there was only a minimal amount of sunlight still reflecting on the other works in the exhibition. The picture above shows the situation at dawn, when a streetlight still casts a strong light on the table and thus the wall. 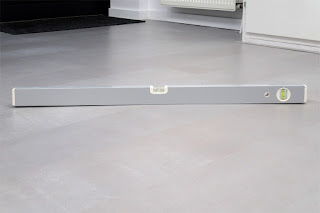 Most of these things affect the experience of the whole space, but some peculiarities are more trivial, effecting only some small aspects. Nevertheless, those need to be taken into consideration as well. I already spoke before of the impossibility of placing things on the walls next to the entrance. There is an additional difficulty for showing sculpture there as there is a slight hump in the floor. This hump makes it difficult to place sculpture in such a position, further limiting the options of the space.

And then there are the more banal qualities of the walls and how good they are at receiving nails and other fasteners. In my particular situation I have four different varieties. First there is the standard double-lined plasterboard, which works well for nails, but is awful for anything small that requires a screw. The opposite wall is concrete, which is awful for nails, but with the right tools allows for straightforward attaching of screws. The walls I've built myself are plasterboard, but with a plywood backing, which is the perfect solution as it takes both screws and nails without any problems. Then for some corners there are a few parts that are concrete but reinforced with some kind of metal structure that proves impossible to work with and thus simply have to be avoided.

So that's a short overview of the pecularities I have noticed in my own space so far. At the time of writing this I'm only this I'm only a few weeks into the first exhibition and so I haven't quite figured out the entire space yet, but there has already been plenty to learn.