The Tree of Knowledge

There exists an idea that a tree trunk splits up into two separate branches, which then recursively split into more smaller branches. This leads to the common knowledge hat one can easily abstract a tree by simply stacking Y-shapes of various sizes, as professed by Bruno Munari in his 1978 book 'disegnare un albero'.

This in turn leads to a view of a tree as a single trunk that then has numerous branches originating from a single point that is the 'end' of the trunk. These branches are arranged in a seemingly random pattern and at at every split the branches grow smaller, if not in length, then at least in circumference. It seems fairly straightforward to draw a tree with this knowledge in mind and in fact many artists, well-known or otherwise, do exactly this:

All of these examples are immediately recognisable as trees, but they do seem somewhat unnatural. This is because while the previous description is a fairly intuitive description of the final outcome of a tree's behaviour, it does a poor job at accurately describing the factual physiognomy of most trees. In order to understand what is really going on, one has to question what a tree is trying to accomplish, so to speak.
A tree gains energy from photosynthesis trough sunlight hitting its leaves. It thus is able to gain more energy by having more leaves exposed to light. If a tree was nothing more than a single trunk, the possible surface area of the leaves growing from this trunk would be very small, with a part of the leaves never receiving any direct sunlight at all. But when a tree grows a branch, the possible surface area of the leaves is greatly increased and this also has the added advantage that now it can position its leaves in an open place that receives sunlight throughout the day. It can thus be said that the main purpose of branches is to enable the tree to receive more light.
It is therefore easily seen that the branches growing horizontally, and even downward, in the previous examples are unlikely to occur in nature. Sunlight isn't to the left, or the right, and it's certainly not on the ground. Sunlight comes from high up in the sky and most trees thus try to get their branches as high as possible. Growing tall allows them to stand above other vegetation, thereby 'stealing' their sunlight, as well as simply being closer to the sun and the light it emits.
Trees only grow their branches out horizontally if they absolutely need to. Growing a branch costs a lot of energy and it stands to reason that a tree would limit the size of their branches to a minimum. Why grow your branch out a couple of meters when  you can achieve nearly the same yield of sunlight by just growing slightly askew from another branch?
These kind of principles are clearly illustrated in the winter drawings by Peter Liversidge: 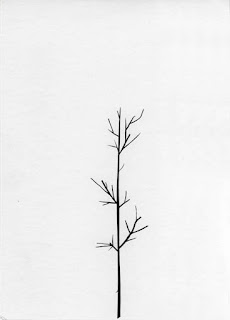 You can see that this tree looks much more natural, because it follows the tree's inner logic much more closely.

Besides the way that branches grow, there is another piece of common knowledge about trees that is false, or at least is more nuanced than its common conception.
A tree doesn't only grow branches, it also grows roots and of these roots it is said that they grow in a very similar manner to the branches. According to this vision, a tree looks essentially the same underground as it does above ground and at first glance this looks to be at least feasible.
Again we see the kind of splitting up into Y-shapes that we had already seen in the trees branches. But we have also already seen that this way of looking isn't necessarily true and if we look once more to the function a tree's roots have, we can easily see that they grow in a pattern that is distinctly different from the tree's branches.
Besides sunlight, a tree needs water and it procures this water from roots in the ground. Just like with the branches, more surface area means more water, so a tree essentially wants to have as many roots as possible as close to water as they can be. In practice this means that opposite to a tree's branches, the roots do in fact grow out largely horizontally. Most easily renewed water supplies, through precipitation or streams, don't sink down very deep under the earths' surface. At the same time, the deeper you dig into the earth, the more resistance you will encounter. It is thus the most economical for the tree to grow its roots out horizontally and only go further down if it is absolutely necessary.
That this is the case can clearly be seen in another etching from Louise Bourgeois, where she drew a tree that appears much more natural if that etching is turned upside down: 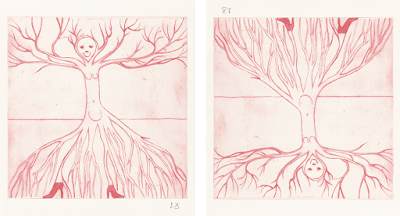 It is extremely easy to fall into the trap of these misunderstandings. Our perceptions tend to generalise very quickly about superficial appearances, rarely taking the underlying mechanisms into account. I too have long struggled with a simplified idea of a tree's shape. For about a decade, any time I would attempt to create a tree without paying very close attention to a real world example, I would invariably end up with some variation of the Y-shaped tree that never quite looked right to me.
It wasn't until recently, when a trip to a subtropical climate and its overabundance of vegetation in high competition with eachother led me to some insights and inspiration to make a very abstracted sculpture of a tree: 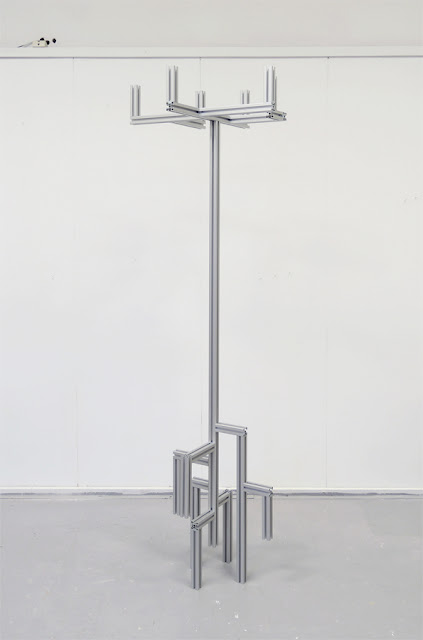 By itself this might seem like a fairly straightforward simplification of a what a tree is. Some branches, some roots, a trunk, that's a tree alright. Even the very unnatural right angles and equal lengths of some parts don't make it appear any less organic than Antony Gormly's sprawling tree from earlier. All of that is fairly boring and I don't believe it's any real achievement for a sculptor to be able to make something that looks like a tree.
What has interested me in making this particular tree, however, is that by simply arranging some similarly sized pieces on two ends of a length of standardised building material, I have made a comprehensible abstracted tree that is distinctly upside down.
Without going into extremes and by only using a few sparse suggestions of a tree's characteristics, the distinction between a branch and a root is very clearly made. Highlighting this difference between a root and a branch is what interested me when making this sculpture.