During the summer of 2018 McDonald's launched an advertising campaign in the Netherlands. For this campaign, they created a small version of a McDonald's restaurant, only capable to seat five people. For a period of a month people could enter a contest where they would make a case for this private McDonald's to be placed in a location of their choosing for a day. After which McDonald's would pick the most interesting suggestions and actually deliver the restaurant to the location of the winners.

While some locations were sentimental things like grandma's garden, one family requested a personal McDonald's on a remote location where they take their vacation every year.
This has led to the following promotional photo: 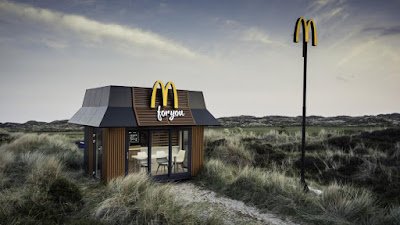 Which of course reminded me quite a bit of this other famous chain located in a far off location: 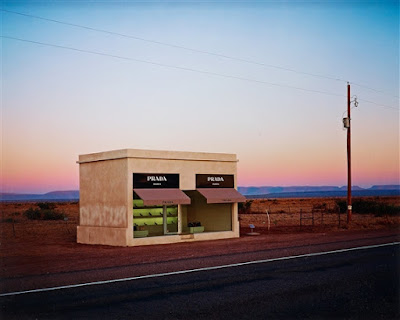 I have already discussed the problem of intentionality before and suggested in my introductory post that Prada Marfa is only an artwork because we are not used to seeing high-end fashion stores in faraway locations. I also said that the precarious status of an artwork is biased to something not being an artwork rather than something being an artwork when it's not.
That an advertising campaign of a large multinational has now effectively resulted in the same concept as the 'subversive' work by Elmgreen and Dragset is noteworthy. The intentions of McDonald's plainly lay with giving the brand a more personal feel, by displaying the wants and needs of individuals rather than large groups of anonymous consumers. They did not have art in mind, but nevertheless employed a similar strategy of isolating an otherwise ubiquitous object in order to make it more special and original.