The Problem of Intentionality

Sometimes things are done in unorthodox ways without being intentionally out of the ordinary, through incompetence, misunderstandings or simply being a readily available solution.

During the 1990's an elementary school teacher placed various kind of substances on an overhead projector to illustrate various processes to her class. Ice that melts, water that evaporates and a frog leg that has a different density at different parts.
This was surely a fascinating display for the young audience who have never seen such small things projected on the wall in such a grand fashion.

In 2008 Dutch artist Navid Nuur created a work titled 'Veins of Venus', presently in the collection of the SMAK.
The work consists of an fridge full of popsicles, a partially slanted table, an overhead projector with a slanted plane of glass and some cleaning supplies. A popsicle is placed on the glass and it slides down the glass in liquid form because it is melting from the heat that the projector produces, the image of which is all the while projected onto an adjacent wall. When there is just a small wooden stick left, an assistant in the museum cleans the glass plane, grabs another popsicle from the fridge and replaces the previous popsicle.

This work is more rigorously connected from a formal perspective, with fridge, table, projector, projection and cleaning system all forming a cohesive whole. Besides this, however, there is but little that separates it from the previous example of the teacher.
What makes one an artwork and the other a teaching tool therefore depends on previous knowledge one has. If a person did not have the experience of the teacher showing these things, a small machine that produces an interesting visual of melting icecream on a wall is an object they likely have never seen before and therefore can likely be considered art. On the other hand, if they did have the experience of their teacher doing this when they were young, to say that it is merely a slightly more self-contained version of a simple illustration is perfectly valid.
What is interesting to note is that the teacher showing these things in class is never art under any circumstance, as it will always simply be a way to illustrate the scientific principles. The later inclusion inside an art-institution does not make this activity an artwork, yet that it existed in a different context does potentially invalidate it's stature as an artwork. 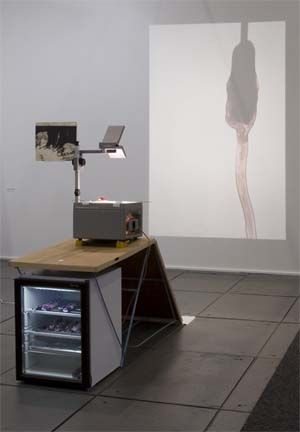