'Pup king', an excellently made plush dog, designed by Yoshitomo Nara, was one of the first artist's objects I have acquired. It was followed a couple of months later by a bookplate that Robert Gober produced. Originally conceived as an edition of 250 boxes with 100 loose leafs inside, they are now sold individually for small profits by re-sellers on eBay.

I bought these two items because they were affordable and created by two artists whose work I greatly respect, but whose work is otherwise unattainable to me. It also struck me that Gober's card was his second foray into reproducing and fabricating newspapers, something that has taken on quite a considerable role in his work since. These humble objects thus had their own historical significance.
Besides enjoying their presence in my home, I didn't gave these object much thought during my day to day life. That changed a few months later when I discovered that copies of Martin Creed's 'Work No. 1090' were still available. This was another relatively cheap, industrially produced work from a well-known artist, perfect for this part of my collection. A few years earlier I had gifted a copy to a friend and always regretted not ordering another one for my own enjoyment. With this discovery I could acquire it without problem and more significantly, these three works now formed a small, yet cohesive, group. They were all inexpensive objects created by very different, yet renowned, artists that hold some importance in their oeuvre. And more importantly, they all consider dogs in one form or another.
Which seemed like an excellent starting point for a small exhibition set inside a living room. The show's title: 'YES / NO; The dog show' came readily from an encounter with a graphic on a street in Luxembourg, indicating on which side of the road dogs were allowed on the grass.

After these very natural progressions, from there things got somewhat tricky.
The absolute worst thing that can happen to a work is that somebody has to point out its existence or that one has to talk about it in its presence. As my collection is physically small and not especially aesthetically coherent, both those things seemed likely to occur if they were presented in a straightforward manner.
The obvious solution was some clever exhibition design, the kind that collects and unifies anything presented inside it. But again, due to the small scale and different demands of the various media, a successful attempt seemed unlikely. Several designs were made, with varying results. The unsuccessful ones were utterly insufficient, while the qualities of the better ideas overshadowed the objects they were meant to highlight.
I was still intending to continue the project, but by now I was doing so somewhat begrudgingly. The project was missing something crucial and I did not know what it was.

Fast forward into the future again and I'm stumbling on the work 'Steiner Bird All Bled Out', which was part of the larger 'Fieldwork' that Ryan Gander exhibited at Lisson Gallery in 2015. This work is a toy bird placed on a puddle of blood made from plywood and red paint. It immediately dawned on me that the thing that was naturally missing from a pack of dogs was a tiny mauled bird.
Of course this work, and especially its larger context, were unattainable to me, but the same can not be said of its parts. The exact wooden bird was identified easily enough and as it happened the other half of the work was already in my possession. A few years earlier I had acquired a similar wooden puddle of blood from Belgian artists Robbert&Frank.
I felt this change in the works recreation was significant enough to warrant such unscrupulous appropriation, yet stringent enough to adhere to the original integrity of the objects involved.
The problem of accrediting Gander as an artist in the show was solved by simply placing a catalogue for 'Fieldwork', opened to the appropriate pages, in the vicinity of the recreation, so that both the photographic and physical reproduction could be seen from the same vantage point. This solution seemed fitting given the somewhat ambiguous status of published books within contemporary practice.

Although the end result was an near-unified whole, it was through many little serendipities during a period of about two years that I ended up with a modest, yet cohesive, exhibition. 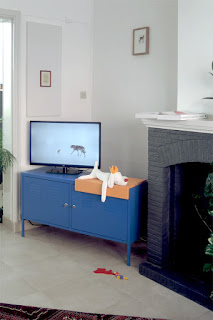