The audience barely had time to see it

Back in 2014 I took an early morning train to the airport. There was no one on the platform except me and a woman. She pointed towards my suitcase and asked me if I was also heading towards the airport. I told her I was and the expected chitchat ensued. The train arrived and it was quite small, so we ended up sitting across from each other. I wasn't still quite awake and eventually we ran out of things to say. To avoid spending the rest of journey awkwardly avoiding eye contact I took a can of soda from my bag and began to drink it.
After a few gulps I quickly realised that the contents of the can weren't going to buy me nearly as much time as I was hoping for. But I also knew that she couldn't see the contents, so I just spent some more time quietly sipping the empty can, wondering how long I could keep on doing that before she would become suspicious.

Which got me thinking, a lecture is a semi-public event where a large group of people tend to spend quite a bit of time watching somebody drink. If my can was already empty after a few big sips, there is no possible way that a single can could last for the entire duration of a lecture. Any attentive audience must thus surely be able to piece together that whoever is talking is pretending to drink from an empty can.
I knew that in a month's time curator Charles Esche would give a talk at the university I was then attending, so I sent him an email explaining the project and asked if he would like to participate. His secretary told me he didn't really understand what exactly he needed to do, but that he would gladly help and I should talk to him shortly before the lecture. 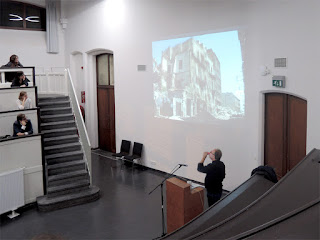 So I brought him a can of soda before the lecture and told him what to do. I'm sure it must have caused him quite a bit of discomfort, so I'm very thankful for his small sacrifice in the name of art. When I spoke to him afterwards he was unsure if he did it right and I told him that I was certain that nobody had noticed anything unusual, so he had done a great job.

The work and its story always seemed straightforward enough to me, but in the years that followed I've had a few conversations about it and people seem to often oversimplify it. A common response is that the work is about hiding something from a public. A teacher said he knew about an artist who often wore a needle in his arm that he covered up with a sleeve. Another person told me the title was misguided, as the audience not being able to see something was a rather unambiguous and therefore boring event. Simply hiding something from somebody indeed is rather straightforward and the example of the needle is nothing more than a padded bra.

However, I do believe that my work is more nuanced then this. The emphasis doesn't lie on hiding something, but on its exact opposite. A man is shown drinking from an empty can and there was ample opportunity for the audience to notice this and get in on the joke, if only their attention was in the right place. In this sense it is much more akin to a magic trick. A great magic trick may perhaps go unnoticed by an untrained audience if it is not dressed up with enough panache. In fact, the title of the work is taken from a movie about two rival magicians. When one of them finds that an excellent new trick from his rival got little to no response, his engineer remarked that 'The trick was too good, it was too simple. The audience hardly had time to see it'.

This was asserted when I later spoke to a fellow student who was an admirer of Esche's work and had attended the lecture. Of course I asked him if he had seen my work and he confusedly said that he hadn't. So I asked him if he had noticed that Charles was drinking some soda from a can. With a slight shrug of his shoulders he told me he couldn't remember. So I plainly told him that the can in question was empty and we both had good laugh about that.