We are all familiar with the literary concept of 'show, don't tell', which states that you shouldn't describe a situation if you can also show it through actions. Regardless about how one feels about this, it is undeniably an essential element that shaped modern literature.

In the medium of videogames there is a similar principle at work whereby a player should be able to learn and understand a game and its rules by simply interacting with it. A lengthy manual or extensive tutorial, even divided up in parts over the course of the game, is considered to be a design failure. The most well known video game, Super Mario Bros., partly is so popular because it capitalised on this principle extremely well at a time when few people were even aware of its value.
In an interview, designer Shigeru Miyamoto describes how the first level of Super Mario Bros. was made to teach you the rules of the game and their implications in a forgiving way. "[...] We added a hole that you'll need to speed up for and then jump. We made sure that there were some parts that even if the player fell, it would be safe. By doing that, we wanted the player to gradually and naturally understand what they're doing. The first course was designed for that purpose, so that they can learn what the game is all about. But then after that, we want them to play more freely. Once the player realises what they need to do, it becomes their game. And so once that happens, we can start introducing surprises and then build upon that."

And it stands to reason that this kind of relationship between a maker and her audience should hold true in art. Someone should be able to understand a work by looking at it and having basic knowledge about what it is or how it's made. Yet the prevalence of this principle is inconsistent at best. At exhibitions there are often curators, and artists, at work who have to rely on lengthy texts to establish even the most basic framework. In Kahn's words they would be considered bad joiners.
Once I entered an exhibition space where in an empty room there was nothing but a small puddle of water illuminated by a spotlight. A quick reading of the press release taught me that the puddle was the leftover of burning a specified amount of methane hydrate, a new fuel that could both potentially be economically important and have an impact on climate change. When it is burnt, water is one of its residues and this residue is what the puddle in the empty exhibition space was.
Which is interesting enough, but there is no possible way I could have extracted this information from a brightly lit puddle and conversely there is absolutely nothing that I have gained from seeing this puddle that I couldn't have read in the text. This person thus decided to tell me what he was concerned with and in the process completely forgot to show me anything substantial.

So how would one go about properly putting this to use in the arts?
To illustrate this I would like to use a recent work of mine as an example. At first glance it is nothing more than some arbitrary objects placed on the floor, just like our earlier example was. But then we start to examine them and find out that the two pairs of shoes appear to be identical, except for their size. The only variable in this work is the specific size of things. With that basic knowledge in mind, we can also observe that the laces of the smaller shoes seem somewhat long, while the laces of the larger pair are ridiculously short. So we can hypothesise that someone has swapped the laces of these two pairs of shoes. The reasons are perhaps unclear, but this can be further speculated upon in a similar matter. 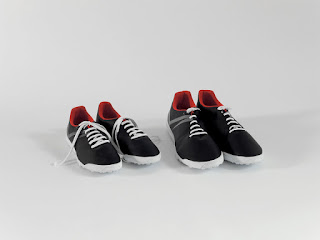 All the information is present to recognise what has happened, it is only up to the spectator to identify these elements. Just as in the show don't tell principle, where the reader is expected to piece the story together by clues given in the work.