All artworks are the result of deliberate actions.
This perhaps seems like an obvious statement, but it's a simple fact that is glossed over all too often. Perhaps in fringe cases it's difficult to define exactly what a deliberate action is, but there is no arguing with the fact that anything that enters into a museum, gallery or 'the artworld' is the result of somebody somewhere making a decision to do so.

This fact also lies at the heart of how we ascribe meaning to artworks. Somebody has done this thing on purpose, so there must be a purpose. Even the purpose of showing how purposeless it all is, is a purpose. This in turn is the basis of any institutional theory of art. And a consequence of that line of reasoning is that anything can be seen as more meaningful inside an art context than outside an art context, because another underlying assumption is that an art context always adds meaning.

We can see this at play in works like Empty Shoebox by Gabriel Orozco and other such 'objets trouvés'. The reasoning is thus: 'object a is commonplace, but if object a is placed in an art context it's no longer commonplace but special and worthy of our attention'. Again, the underlying premise of this statement is that all actions that result in artworks are deliberate and therefore worthy of consideration. This shoe box didn't end up here on accident, its presence is deliberate, and therefore it must be meaningful.
As humans we will try to provide a reason and an explanation for any object that is found in an unusual place. If you're not willing to take that statement at face value, I suggest you put a rock in your refrigerator and wait for the inevitable questions of your spouse to come to you.

All of this serves as background information for something I encountered recently that struck me greatly: 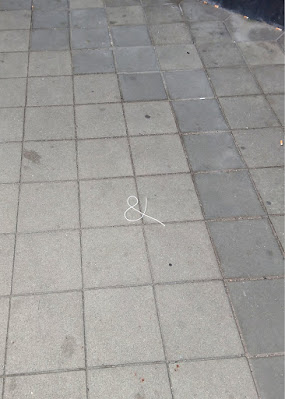 And the reason it struck me is because this is a rare example of an object that would lose significance or meaning if place within an art context.

This object; a shoelace that, presumably, fell into the shape of an ampersand on accident, is a remarkable occurrence. It's not something that would have existed without humans, like a bird's nest or the northern lights might have, yet it's also something that is somehow not the result of a deliberate action. As a deliberate action it would be trivial, but it likewise seems just complex enough to be the result of an accident. And this is what gives this object its impact.
Imagine for a second that it wasn't shaped like an '&', but instead an 'S', a '9' or even an 'R'. While conceptually similar, being a shoelace has taken the shape of a recognisable and common symbol, it appears to us as if those particular shapes would be far more likely to be the result of a random set of circumstances. An 'S' is a less specific shape than an '&' and therefore is an unremarkable occurence. Yet at the same time, an '&' is more ambiguous in its connotations than an 'S'. An ampersand by itself is about as empty as a symbol can be, but it's nevertheless universally recognised and often seen as a complex shape.

Which brings us to the art world.
If we would encounter this shoelace ampersand on the floor of an art institution, I doubt any of us would be as struck as I was when I saw it on the pavement.
This isn't because a piece of string lying on the floor has no place in contemporary art. The examples of string-like squiggles range from Richard Tuttle's Ten Kinds of Memory and Memory Itself to Mark Manders' Current Thought and Carl Andre's 3-Part Bent Short. What all these examples have in common, however, is their seeming carelessness. These works are at first glance simply strewn on the floor, with the artists accepting whichever form they might take. This was even the explicit aim in the first work of this kind, Marcel Duchamp's Three Standard Stoppages.
If artists on the other hand don't wish to accept this kind of arbitrary form when working with objects that aren't of their own making, they instead tend to do the exact opposite. By carefully ordering found objects, they bring a new way of looking to the commonplace object that before had little meaning. A good example is Markus Raetz working with eucalyptus leaves to create stylized and expressive portraits.

Yet our ampersand doesn't adhere to either of these extremes. If it were placed deliberately on a gallery floor, its shape is too trivial and its symbol too insignificant for us to ascribe any greater insight to it. Yet at the same time, its shape would be too specific to register as an uncontrolled or unintentional accident, even if it were factually so.
The presumption of deliberate actions in art would thus give this shoelace ampersand less of an impact within an art context then if it would be encountered accidentally on the street, as I have.
What's interesting about that is that it is a direct counterexample to theories of the readymade and institutional theories of art. This shoelace ampersand would be less eligible as a 'candidate for appreciation', as George Dickie would put it, if it were made by an artist than when it isn't. And through proof by contradiction, this shows that the premises of any institutional theory of art are false.

Through this chance encounter we can thus come to the conclusion that a large chunk of art theory is demonstrably false and this personally made me quite excited.