One of the particular features of the space of lxhxb is that the lighting is installed diagonally between a repeating set of concrete U-shapes.
The aim for the lighting of the space was to follow the implicit mandate as set by the existing architecture, as well as to illuminate the space as evenly as possible. In order to achieve this, I installed the fluorescent lighting at equal distances and under a slight angle. Angling the lighting was a solution that counteracts the shadows cast by the concrete beams. These beams would otherwise create a repeating pattern on the wall, as can be seen in the following photograph: 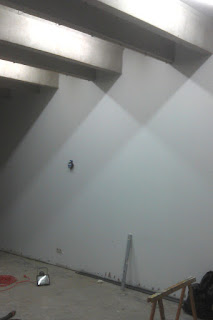 By placing the lamps under a slight angle the unwanted effect disappears completely, as shown by the following computer renderings of the two situations: 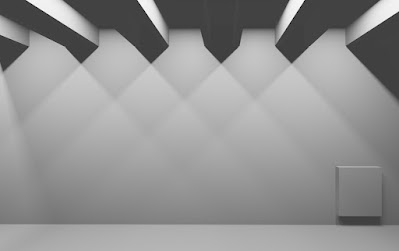 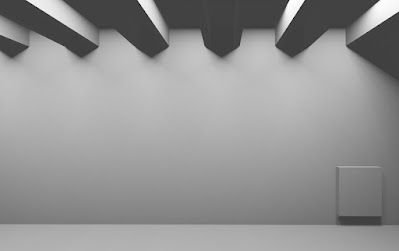 However, after some I time I noticed that the very front of the space had some degree of fall off in the intensity of light towards the facade. 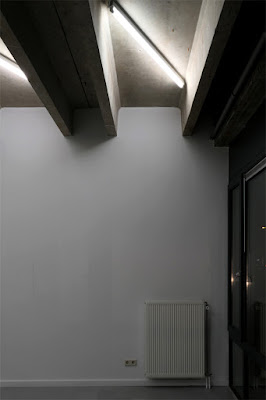 As you can see in this photograph which exaggerates the effect, the wall gets darker further towards the right of the image. The principal reason for this is that there is no further lighting coming from the right to add to the overall amount of light hitting the wall.
However, I also thought that perhaps this uneven distribution of light over this section of wall could be attributed to the angle of the fluorescent lighting, as the part closest to the wall is directly blocked by the concrete beam on the ceiling.
Additional computer simulation would nevertheless suggest that mirroring the placement of the fluorescent light would have only a minimal effect.
Original: 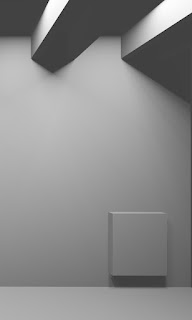 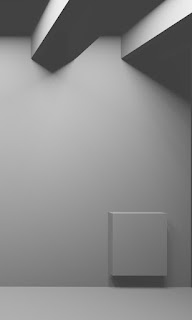