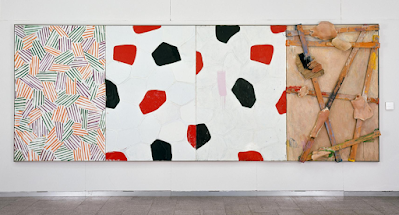 "The 1970s showed a marked change in the work of Jasper Johns as his compositions became more abstract. Beginning with his 1972 painting Untitled, Johns developed his motif of crosshatched lines in increasingly complex systems, experimenting with colors, patterns, mirroring and reversals. According to the artist, the inspiration for his crosshatched works came from a pattern he glimpsed on a car that quickly passed him on a highway, “I only saw it for a second, but knew immediately that I was going to use it. It had all the qualities that interest me – literalness, repetitiveness, an obsessive quality, order with dumbness, and the possibility of a complete lack of meaning.” Over the next ten years, Johns produced many variations on the theme in both paintings and prints."
I have no reason to doubt this origin story of the crosshatched works produced by Jasper Johns, as provided by Sotheby's on the occasion of a 2018 sale of prints and multiples.
However, in the list of my YouTube recommendations I encountered a video titled 'Properties and Grainstructure', which is episode 5 in the BBC series 'Engineering Craft Studies'. This series was made and aired in 1972, the same year Johns made his untitled multipart work that would spawn numerous other works in the following decade. 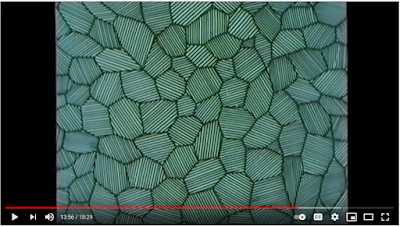 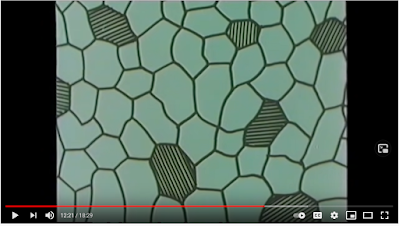 In the BBC film they explain the properties and structure of steel using the graphics shown above. There is an obvious and striking resemblance between the first two parts of Johns' work; the crosshatched pattern in the first image and the partial fills of the second image.
Another salient fact is that while Johns claims that he 'immediately knew he would use it', at least a year passed after this initial work before the flux of other hatching-related works arose. The 'flagstones' on the other hand didn't become a relatively common occurrence in Johns' work until the 2000's, almost thirty years later.
I'm in no way to implying that Johns was influenced by this film and neither am I of the opinion that this would diminish the work in any way, but it is nevertheless an interesting serendipitous occurence.