The Peculiar Economics of the Wonderful World of Video

In 2018, artist Francis Alÿs won the Eye Art & Film prize that has been handed out every year since 2015 by the Eye Filmmuseum and the Paddy and Joan Leigh Fermor Arts Fund.
I don't believe many people would disagree with his nomination and the choice for Alÿs as a recepient of the prize is not what is up for discussion here.

In 2020 a solo exhibition of Francis Alÿs was mounted at the Eye Filmmuseum, which was at least in part motivated by Alÿs recieving the prize a little over a year before.
The exhibition was titled 'Children's Games' and focused on an aspect of Francis Alÿs' work that he had been working on since 1999. In that twenty year timespan, Alÿs made 18 short videos documenting various groups of children in various parts of the world playing games with limited material means, fuelled by imagination and containing simple rulesets, that could easily be discerned by observing the videos.
The full group of 18 videos was presented in 'a big spatial installation at Eye' together with the 2011 film 'REEL/UNREEL', originally conceived for documenta (13).

So far so good you might think, but there are some peculiarities with this exhibition that raises some questions about the economics surrounding artists who work with video.

It is common knowledge that it is possible for video, and especially digital video, to be easily reproduced and distributed at a trivial cost. This is, of course, in stark contrast with the art market, where exclusivity and singularity of physical objects has always played a large role in driving the prices due to simple applications of supply and demand principles. It is not uncommon for artists to incorporate physical elements in the exhibitions of videos, so as to create a 'unique' work that is better adapted to function in this kind of market. This is often the case with Francis Alÿs as well, whose showing of 'REEL/UNREEL' at the eponymous exhibiton at David Zwirner Gallery was paired with a number of documentation materials and other related artworks. These were mostly paintings in 2013 and in an earlier exhibition from 2007 they consisted of toy-like guns with film reels for magazines.
It can also be said that the inclusion of these objects and related materials justify the traditional art exhibiton format where a physical space is inhabited by physical objects, therefore creating a necessity for a spectator to travel to a singular location in order to see the work.

Francis Alÿs himself is also aware of the position that video can take in today's art context. Very much in line with the themes present in his work, Alÿs has made most of his videos freely available on his personal website for viewing and downloading. It's stated explicitly that they can't be used for commercial purposes nor screened or exhibited without consent, but they are nevertheless viewable by anybody who would want to do so and this includes the complete set of videos from the 'Children's Games' series, as well as 'REEL/UNREEL'.

Which brings us back to the exhibition at the Eye Filmmuseum.
At the museums own assertion the exhibition took place in 'a big spatial installation'. It certainly was a large room where the videos were shown, but besides that there is very little to remark about the actual installation of the work. There was no additional works relating to the projects and even some simple documentation or other ephemera the visitor would only be able to encounter at the exhibition was lacking. There were some, relatively uncomfortable, school chairs distributed throughout the space in order to superficially fit with the themes of the work, but that is about it. 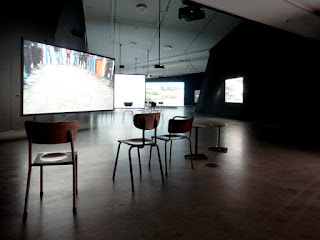 With an entrance fee of €11, the Eye Filmmuseum charges quite a bit of money for the exhibition, while there are only works on view that have not only been exhibited before, but can be viewed for free at any moment.
So it is my question who stands to gain from this exhibition. There is little cost to justify the entry fee, as the works on show are freely available and even the exact installation of the works has been done with a seemingly bare minimum of expense for a relatively large museum. The explicit choice has also been made to make Alÿs' exhibition a solo exhibition and not a group show as was the case with the work of the three previous winners of the prize, where you could argue some kind of comparative discourse would always arise between the selected artists.
All in all the exhibition seems less as a way to showcase the work of Francis Alÿs and more a way for the marketing department of the museum to try to capitalise on the fame of a great artist and perhaps provide a way for the museum to recoup a portion of the prize money it so generously provides.