On Skateboard Photography and a Way of Looking at Things

This is a story about artists and their ability to look.
Not too long ago, a friend showed me a number of photos another artist had collected. In these photos, a person was either jumping or falling and the artist noted that people were surprisingly bad at noticing the small differences in this ambiguity.
‘In this one, for example, do you think this girl is jumping or falling?’
‘Jumping’, I replied immediately.
He was surprised. ‘Most people think she’s falling’, he said.
I replied quite intuitively and without much thinking that there is no way she could have fallen because her arms were straight up in the air and very tense. Nobody falls like that, as you try to find your balance when you fall by redistributing your weight and the straight arms imply some amount of determination.

To me this was supposed to be common knowledge, available to everybody in the world, but I realised that even a simple thing such as inferring what happened right before a certain moment from the details in another person’s body is not something that is innate in us. It has to be learned. I took a second, and I realised I had learned this by looking at skateboard photography.

Skateboard photography is not like other sports photography. Sports photography hardly ever captures a crucial moment and tends to serve better as a sort of general illustration to a verbal description that accompanies it.
This is not the case with skateboard photography. A skateboard trick is often composed of a series of relatively small movements that when combined last about a second or two. Unlike something like a javelin throw, however, each skateboard trick is done in a different physical context. Even courses designed for competition change at every event and thus some amount of environmental detail is necessary for a photograph of a skateboard trick to make sense. Of course you can describe the surroundings in words, but as everybody knows, it’s much easier to show a space in a picture.
The goal in a skateboard photograph is thus to accurately convey the entire story of the trick. Where the skater comes from, what part he actually performs the trick on, what the trick is, sometimes even what trick the current trick is combined with, where he will ride away and how likely it is that the trick was successful on this particular attempt.
This seems like a lot of information to gather from a single moment that lasted less than 1/1000 of a second, yet after a bit of experience it becomes almost second nature. As a skateboarder who grew up with printed media, all this information is readily available to me and even other details such as whether the skateboarder is right- or left footed can be learned from a glance at a single still.

Though I must say that I had to learn to identify these subtleties and I remember eleven-year-old-me studying them very consciously, analysing the photographs that had presented me with the seeming impossibility of piecing together the entire story of what these skaters were doing.
There are two tricks in particular that stand out in my memory. The noseslide and tailslide. As the name implies, one of these is done on the front, or nose, of the board, the other on the tail.
So a noseslide looks like this: 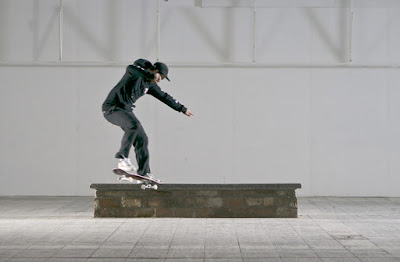 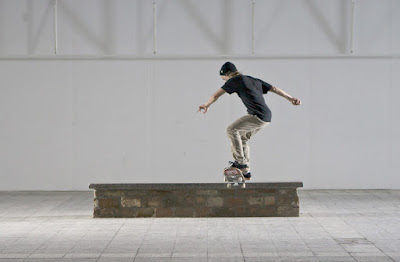 If you know nothing about skateboarding you are probably looking at these pictures as if they were nearly identical and indeed, that’s the way I saw them when I was eleven years old. I knew, however, that there was supposed to be a difference and the difference lies in the way a skater approaches the object in each of the tricks. Riding up to slide on an obstacle a skaters' board is parallel to the obstacle, while the wanted end position is near-perpendicular to it. An ollie, the way to jump on a skateboard, works by tapping the back really hard and then moving your weight forward to drag the front up as it is suspended in the air. If one understands this correctly, it becomes obvious that a noseslide is a far easier trick, as it allows the person to move his weight towards the obstacle, while in a tailslide the weight of your upper body initially wants to moves away from it, before the lower half can make contact with the obstacle.

When you look at the previous to photographs closely, you can see how this is reflected in the positions of the body of both people. The guy doing the noseslide has his arms perpendicular to the obstacle and in a straight line with his board. This follows from him trying to guide his board nose first towards the obstacle.
The guy performing the tailslide, on the other hand, has his arms parallel to the obstacle and nearly perpendicular to his board. This also follows from the nature of the trick, where the position of his upper body guides his mass alongside the obstacle, while his board moves with the front away from the obstacle.
An observant reader may have also concluded that these two skaters are going in opposite directions. The guy performing the noseslide came from the left hand side and moves towards the right, while the guy performing the tailslide came from the right hand side and moves towards the left.
It thus seems that the basics of observing a single moment in order to understand what happened before and after are not that difficult to grasp, yet it tends to elude even the most accomplished sports photographers. To a skateboarder, the photographs professional sports photographers tend to make of skateboarding are laughable, as they say nothing about these existing contexts, often providing only a moment of ‘intensity’.
On the other hand, accomplished skate photographers have often gone on to make great careers in documenting other sports, such as Atiba Jefferson in the NBA and Chris Ray in the NHL. Their experience with constructing an entire story has given them considerable advantage to most other photographers that are merely trying to capture ‘the moment’.

Something comparable tends to happen in art. The ability to gather this kind of information from an image is often called visual knowledge and is supposed to be related to one’s ability to look. On the contrary, one’s ability to 'look' has nothing to do with your ability to recognise another person’s actions, as is exemplified in the anecdote that started this story. As artworks are the results of things done by people, being skilled in both telling the story of an action, as well as understanding its necessities, will be far more important than the way one looks at a sunset for its perceived beauty.