In my rather uncompromising view of all art as uncommon object manipulation, I am sometimes asked how I would account for western art before the 19th century, as if there was a singular goal of artistic representation during that period, that we have retrospectively called photographic.

This notion is far removed from reality and in fact technique and method have been very important at any point in art, or at the very least in their consideration as art today. 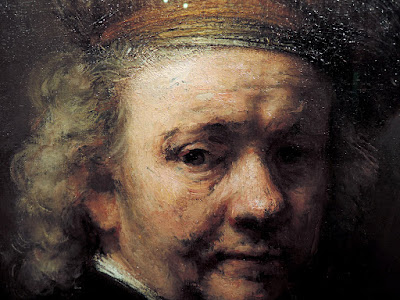 This is a detail from a self portrait by Rembrandt from the first half of the 1660's. Rembrandt, naturally, may possibly the most famous artist in the entirety of history. When asked why, the man on the street will likely tell you that he painted 'the best', by which he means the most realistic, the most true to life. Which is not the case, at all. Rembrandt is one of the first painters to really use brushstrokes as their own expressive force, which merely suggest the other features they are meant to show. If Rembrandt's work was photo realistic, he would have had black holes in his face near his eyes, nose and mouth and his collar would be distinctively brushstroke-shaped. The strong emphasis on the quality of individual brushstrokes is something that has become a staple of late 19th century and early 20th century painting, something that has undoubtedly helped Rembrandts' reputation in our current time. 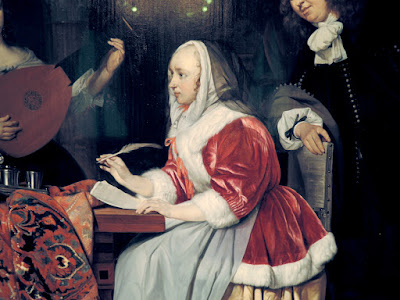 Here is a detail from a picture by Gabriel Metsu, also made during the early 1660's. The size of this detail is approximately the same size as the previous example. It should be immediately obvious that in contrast to Rembrandt's quick, thick and broad brushstrokes in a muted palette, Metsu's painting has been painted in a very fine technique, slowly applying layers of thin translucent paint, with small brushes and in a wide range of saturated colors. Within the confines of brush painting, these two artist's techniques could not be further apart and yet they were created during the same decade, in a similar geographical location and at least today their reputations are roughly equal, as is reflected in their inclusion in the room with 'masterpieces' from the Rijksmuseum in Amsterdam. 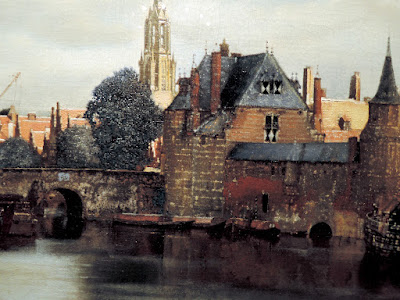 Another artist working during that time is the equally highly regarded Johannes Vermeer. Again, in the photograph above there is a similar detail from his View on Delft, painted during the same decade as the works from Metsu and Rembrandt. Although Vermeer's painting style in this painting at first glance seems like a compromise between the technical illustrative work of Metsu and the emphasized dexterity of Rembrandt, it soon becomes clear that there is something else at work. The rather flatly, yet accurately, painted outlines of the buildings are everywhere highlighted by small dots of paint of which it can hardly be imagined that they were present in the actual scene.
These blots are less present in the immediate foreground of the work, but they possess the striking characteristic that in some places they lose nearly all direct reference when viewed up close. 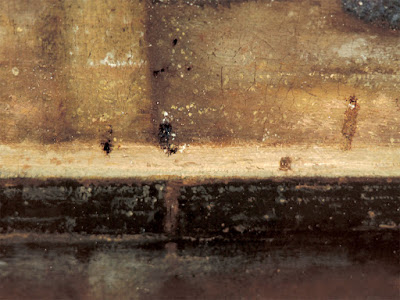 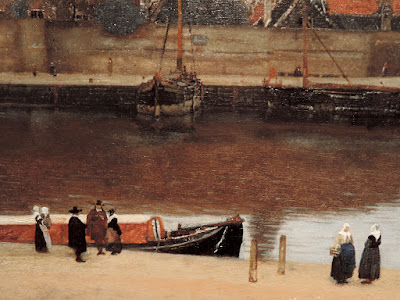 The above picture is a detail of the upper left corner of the lower picture, where the three darker spots can be recognised as three individuals and a dog. Especially this dog has grabbed my attention, as it cannot be said that it is anything else than a shapeless little blob when seen up close, at a range where Vermeer must have been looking from when pressing his brush onto the canvas.
It could have been argued that the exact shape of the brushstrokes are an quasi-accident or a mere byproduct of the material available to him.
Yet it seems to be a clearly defined choice of technique, rather than a shortcoming of any available materials. In the detail below from Metsu's earlier painting, each ball on the dog's collar is about the size of the dog in Vermeer's painting, clearly demonstrating that smaller and more accurate details have been achieved by other painters with access to similar materials. 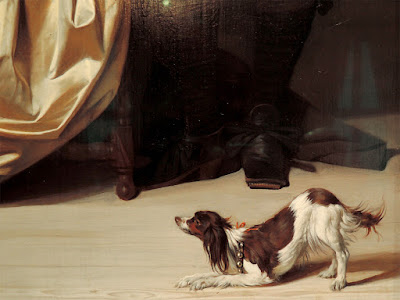 By comparing these three artists and seeing that although they worked during a similar time and in a similar place, they have very different and distinct approaches to how one creates a painting. It is thus clear that they did not all aim at the same singular outcome, but rather searched for innovative technical solutions and that their different outcomes were not limitations in achieving perfection, but rather deliberate choices that defined their respective approaches.