The relationship between skateboarding and art has always been a peculiar one.
As skateboarding is an activity related to the creativity and capabilities of individuals, skateboarders have many personality traits in common with artists.
However, generally speaking skateboarders are not artists. No matter what they do and no matter how far on the fringes of society they operate, everything that makes them skateboarders is related to the possibilities of a four-wheeled piece of wood. The notion of what could be art from a skateboarders perspective must thus be considered from within these possibilities, not with the mindset of someone outside the subculture.

There are a few archetypes of skateable objects; stairs, rails, ledges, banks and quarter-, half- or full-pipes, otherwise known as transition. The materials used for these are also somewhat predetermined. Slide- and grindable surfaces, like rails and ledges, are preferably in metal or hard stone like granite, for a minimum amount of friction. Banks and other kind of surfaces to ride upon are preferably even, so there are no obstructions for the small wheels of a skateboard. Wood and concrete are common materials. That the options in the level editor of Tony Hawk's Pro Skater 2 were exactly these categories confirms these observations.

Furthermore, there exist a number of sculptures in public space that resemble those archetypes in some shape or form. These are often sought out by skateboarders as a kind of creative spot to skate on. A case in point is PJ Ladd's ghetto bird on Claes Oldenburg's Dropped Bowl With Scattered Slices and Peels. 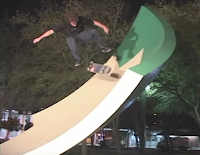 In a kind of reverse analogy, skateboarders, companies and organisers of events often believe that making skateboarding obstacles that resemble sculptures will make them into art. More often than not, these are simply variations on the above mentioned archetypes which are then painted with varying degrees of inventiveness. Examples include Vans Downtown Showdown and Transworld's Skate and Create series, illustrated below.

Note how they are all just transitions and banks with perfectly grindable edges fabricated from angle iron. While probably fun to skate and mostly interesting in appearance, they add nothing to the basic vocabulary of what is possible for a skateboard.
Taking the cake on the complete lack of artistry is Red Bull's Skate Space in Jefferson Park, Seattle. It is nothing more than a round curb situated in front of some extremely large red circles. As one would expect from a company like Red Bull, its value in both the artistic realm as well as its skateability is next to nil.

More recently cities and museums have noticed skateboarders' interest in generic sculpture, commissioning artists to make skateable sculptures. This is partly in response to skateboarders indicating their dissatisfaction with prefabricated, uncreative, obstacles and partly as a way to integrate skateboarding better into public life.
The first example is A free ride by Raphaël Zarka. He remade Tony Smith's Free Ride in wood with angle iron, essentially creating a THPS2 level editor version of Smith's famous piece.
A similar strategy was employed by Jonathan Monk for the city of Philadelphia in 2015. With what undoubtedly must have been a much larger budget, Monk had some replicas made of two nearby Sol Lewitt sculptures. These were not constructed in the open concrete of the originals, instead they were constructed in wood clad with angle iron, the skateboarders building method of choice.

As you can see, the shapes and materials of 'sculptures' that are used by, made by or made for skateboarders all clearly fall within the expected possibilities of a skateboard. So when I was approached by the then-director of a skatepark to think about possibilities to integrate art into the operations of the skatepark, I very consciously avoided this approach.
Instead of making generic obstacles that were aesthetically pleasing, I set out to invent some new ways to skate or other materials to skate on.
One of my first ideas, and the only one that got built, was a short ledge with a slideable surface made from 108 billiard balls. This got approved right before the director left his post, leaving other projects unrealised. Nevertheless, I feel that I came up with some successful and some unsuccessful ideas that rethink some fundamentals of what a skateboarding obstacle can look like.

Some of these projects were more conventional than others. I for example drew a simple flat rail that split into two ends at about two thirds of its length. I also designed a grindable obstacle that went from having one corner to having two, three and four corners in succession, mimicking the strategy of Bruce Nauman's Model for Tunnels. There were various other formal experiments, including a joke proposal for a horizontal loop. Two months later and to my great surprise, I saw Tony Hawk perform an actual version of that on youtube.